Sharon has worked tirelessly over the years in local history research in Limerick. As well as writing books on Limerick’s history, she established www.limerickslife.com in 2004, an unparalleled treasure trove of Limerick history from rare images to untold stories of Limerick’s people and places.

Many thanks for your administrative efficiency and attention to detail that made matters work so well. It was a fine event, and I trust, and hope, you and Limerick are happy with the way matters turned out.” Professor James Kelly, Dublin City University, Ireland. April 2014

Sharon has an outstanding passion for local history, combined with unbounded enthusiasm and tireless capacity for interacting with others and sharing her knowledge.  Her website Limerick’s Life has become a real brand for Limerick, due to the huge amount of work she has put into identifying and bringing to light information about the city’s past. Sharon has an excellent insight into the opportunities opened by digital / social media and she is then perfect example of a modern age scholar. I met Sharon in 2011 while working on the Connected Limerick project and ever since, our collaboration has gone from strength to strength.Sharon has generously contributed her time and expertise to our research and community projects by giving invited talks, guiding historical tours, participating in recording sessions and providing us with excellent information and images from Limerick’s past

Sharon has displayed a timeless commitment to her field. A multi-faceted talent, Sharon adroitly navigates between digital and print mediums to deliver a finished product or resource to satisfy the most discriminating standards. She is an effective communicator, both orally and in the written word, whose talents and capacity for detailed research have yielded top shelf publications with broad appeal. Sharon is a team player and would be a welcomed addition to any employer seeking an articulate, intelligent and driven candidate who numbers professionalism and quality amongst her highest priorities.

Sharon knows more about the history of Limerick than anyone I know. Her website is incredible. She is intelligent, witty, creative and someone I greatly admire. I love working with her and always look forward to it. 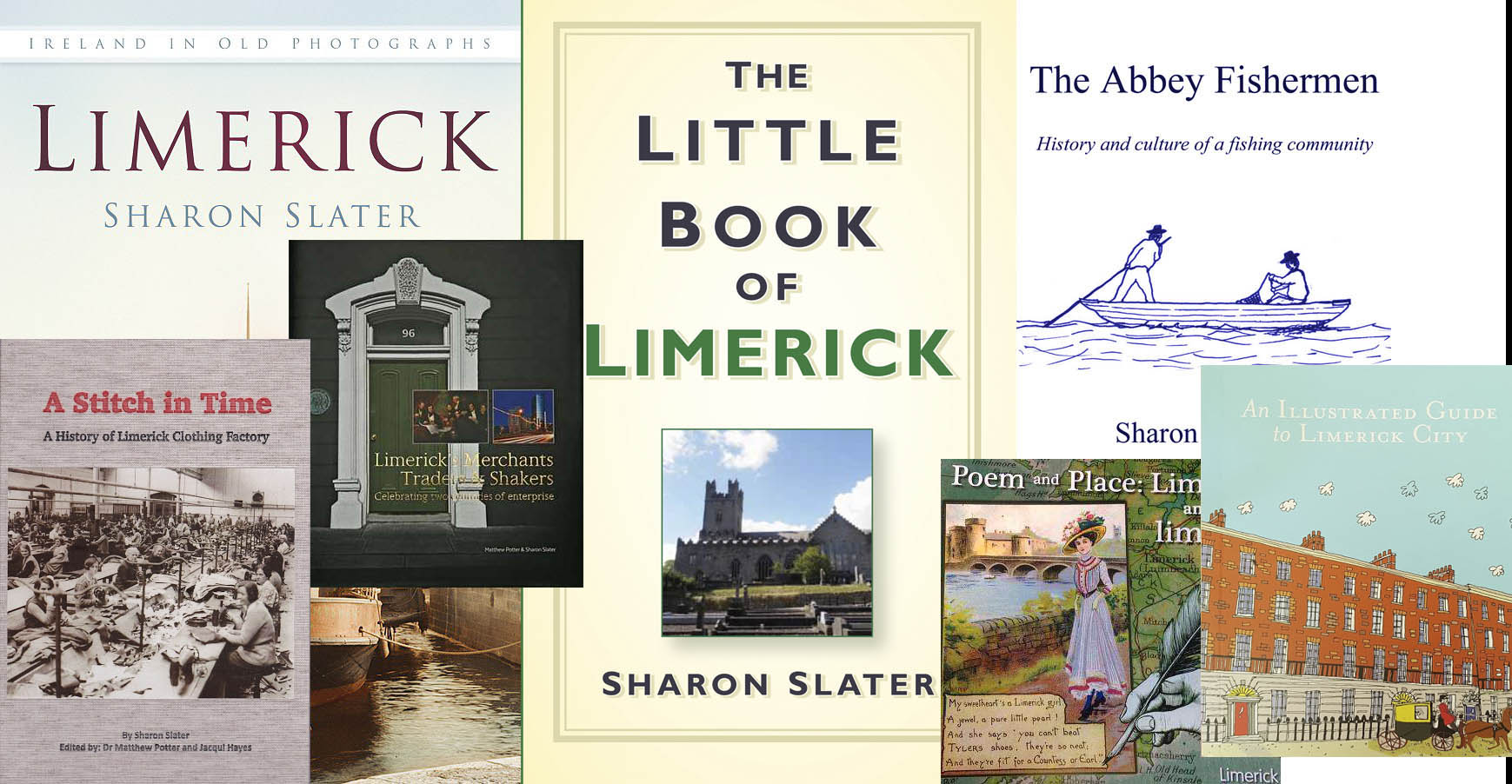 The A-Z of Curious County Limerick looks at the forgotten tales, such as the story of the deer that ran amok through the streets of Limerick City and the man who was sentenced to work in a bog. Many of these stories of the area were well known and talked about at the time but did not get passed down to recent generations.

Ormston House is delighted to welcome Sharon Slater as our first Historian-in-Residence. We began as research partners on the Feminist Supermarket and quickly realised the extensive research and work commitment required to address the significant absence of women in the written history of Limerick. In this essay, Sharon has meticulously gathered the names of the women who lived and worked on Patrick Street over a period of 166 years. Included are the names of the women who owned property and businesses as well as the women who worked as servants to merchant families. This became Sharon’s mission: that no woman would remain unnamed, nor her contribution unacknowledged.

A NEW guide book to Limerick opens up the built heritage of the city in a quirky, user-friendly way that will appeal to locals as well as to visitors.

And with a very clear-cut map to follow, the pocket-sized book, with its colourful illustrations and short accounts, makes for an ideal companion on a walking tour of the city. Or even an armchair tour.

An Illustrated Guide to Limerick City is the third in a series, published by the Irish Georgian Society. Previous guides brought the reader around North and West Kerry and around County Limerick and included text by Tarbert academic Dr Declan Downey with illustrations by Nesta FitzGerald of Glin.

This time, Nesta has teamed up with historian Sharon Slater to produce yet another gem…

Nesta FitzGerald, the daughter of the late Knight of Glin, is a freelance illustrator based between London and Ireland. After completing a degree in Art History she went on to do a Masters in illustration at Kingston University…

… Sharon Slater is an internationally published author and historian who runs the Limerick’s Life website and is the Limerick Chronicle historian, working for this newspaper on the archive. Her books include The Little Book of Limerick and Limerick: Ireland in Old Photographs.

2017 – A Stitch in Time, a history of Limerick Clothing Factory – Limerick Archives.

When Éamon de Valera was arrested for his role in the 1916 Rising, he was wearing a uniform produced at the old Limerick Clothing Factory on Lord Edward Street. It was a fact he remarked upon when he later visited the Limerick city site, once labelled the biggest clothes manufacturer in the world.

In 2015, a rejuvenation project was undertaken on the site, creating 80 new social housing units geared towards older people and community facilities. As new residents start to receive the keys to their new homes, they are also presented with a copy of A Stitch in Time: A History of Limerick Clothing Factory to mark a new beginning for the historic site.

… Material for A Stitch in Time was sourced from multiple depositories, including the national archives of both England and Ireland. The oral histories of former workers before the closure of the factory were also vitally important, Ms Slater adds.

“There’s never just a source in these projects. Like weaving the story together, pulling all the threads and trying to make it mesh.”

This short booklet was created to coincide with the unveiling of the Terry Wogan memorial statue in Limerick. It was distributed to those in attendance on the day.

If you’ve ancestors from Limerick City or its hinterland, Sharon Slater’s Limerick in Old Photographs is a must-buy book to complement your Irish family history research.

Ireland’s third most populous city has a long and vibrant history and has witnessed huge changes in the last two centuries. These changes have been captured in this collection of archive images by historian Sharon Slater, who runs the excellent Limerick’s Life blog. Through the 128 pages of the book, she shows how the city has grown, recalling shops and industries, streets and buildings, societies and clubs, and a lost way of life.

SIX weeks ago Limerick Chamber of Commerce published its historic tome that was 200 years in the making, ‘Limerick’s Merchants, Traders & Shakers  – celebrating two centuries of enterprise’.

And while its contents date from Chamber’s early 19th-century origin, work began on its 224 illustrated pages in early 2014 when the organisation, appreciating that its bicentennial anniversary was nigh, approached two recognised historians and writers locally to undertake the commission.

Limerick Post took a closer look at this weighty, wonderful masterpiece in the light of this week’s dedicated Limerick Chamber of Commerce supplement, out Thursday 19…

…The result, ‘Limerick Merchants, Traders & Shakers’, was described by Ireland President Michael D Higgins in his foreword as “of interest for many reasons: as a window through which two centuries of Limerick’s story can be viewed from the perspective of the business community; as an examination of the activities of a major Irish chamber of commerce over that period; and as a documentary of the commercial life of one of Ireland’s principal cities.”

Launching the book this morning, Mayor Sheahan said: “The experience, knowledge and distinct pride of place from Limerick Archives shines through in this publication and will undoubtedly help to promote an increased awareness of the connection between the place and the poem. The limericks by local schoolchildren featured in this book highlight how the poem remains as relevant today as it has done for centuries.”

A collection of weird, wonderful, fascinating and obscure facts about Limerick has been launched in the city this week. Murroe historian Sharon Slater – who runs the acclaimed Limerick’s Life website – has put together a 140-page book of some of the less well-known facts about the Treaty county.

The Little Book of Limerick was launched at No 1 Pery Square Hotel on Tuesday night. It tells the stories of Limerick’s eccentric inhabitants and strange traditions, including the most unusual crimes and punishments in local history…

…Limerick’s literary traditions and sporting heritage are also highlighted in a book beautifully illustrated by Gary O’Donnell, a graduate of the Limerick School of Art and Design…

In a well-received speech, Dr Irwin said the new volume was a very welcome and attractive addition to the bookshelf containing works that offer enlightenment about Limerick people and places. It would, he predicted, find its way into many a Christmas stocking locally.

2006 – The Abbey Fishermen: History and Culture of a Fishing Community – Trafford Publishing.

… it mainly centres on the last 10 years of the Abbey Fishermen and their conflict with the Irish Government on the opening of the power station in Ardnacrusha, in the 1930s and the consequent impact that this action had on their community.

… (Book launch) on Tuesday 10 April, 8pm at the Limerick City Library. The book’s forward was written by Denis O’Shaughnessy, while Frank Prendergast will be speaking o the night.